Here is Jameson’s Story (the following is an excerpt from AliceAnn Meyer’s blog “Jameson’s Journey”. A link to that blog is at the bottom of this section).

This Is My Son Jameson, And No, You May Not Use His Photo 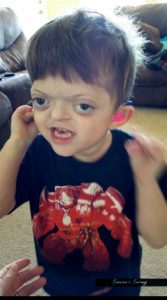 A little over a year ago I wrote an article that featured my son’s sweet face all covered in marshmallow and chocolate, cheesin’ for the camera.

Now that sweet picture has resurfaced and is circulating around the internet. Except, that the photo has been altered. Someone, somewhere, decided for who knows what reason, to take that picture and create a meme comparing my son to a pug. What compels a person to do such a thing I will never understand. There is no way for me to know who did this, but for every post and share of this meme I will do everything in my power to get it taken down.

First, I have to say thank you. Thank you from the very bottom of my heart to every person that has stood up for Jameson. The outpouring of love and support has been overwhelming. I appreciate each and every one of you that has commented, reported, and reached out to us. I can’t put into words what it means to know you are taking your personal time to fight for Jameson. If you see this meme, please let me know. You can report the post, but if you send me a link I can file a claim for copyright violation. 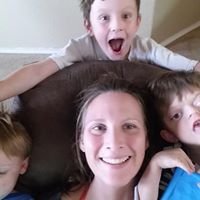 There are two important aspects to this story, the technical and the moral. Exactly one week ago I spent my Saturday night fighting an individual to remove my son’s photo from his Facebook page, where it had been liked 5,000 times and shared nearly 3,000. It was no easy feat and took 100’s, maybe even 1,000’s of reports being submitted, an army of people fighting with me, and a good 24 hours before Facebook removed it from his page. Success!! Only to find it on another site, with 1,000’s more shares and likes. My heart literally sank. But, we fought on.

This one took days for Facebook to remove. In addition to reporting these photos as harassment and bullying, I personally filed claims for copyright violations as this photo was stolen from my published article. I could go on about each instance this meme was found and brought to my attention, but that would take too long. The meme was found (so far) on 6 Facebook pages (3 of whom are the same person – just a little harassing), at least 8 times on Instagram, and 10 or 11 times on twitter. It is on 9gag, Tumblr, and who knows where else. Suffice it to say, it’s out there.

When it comes to reporting on different sites here’s my breakdown.

Facebook: you need to step up your game. Seriously, your reporting platform is crap. Your first line of action is for me to send a message to the poster. Really? Then, how is it that you report something and “it doesn’t violate community standards”, then all of a sudden 48 hours later it does? How many shares or downloads happened in that time frame? Or how about when your Support Inbox sends a message the content reported violated community standards and was removed – but it was never removed.

Instagram: thank you. You were quick, in most cases it took much less than 24 hours removing the memes. Your reporting and claim forms were also much more user friendly.

Twitter: thank you, thank you, thank you! You removed the content within 20 minutes, yes minutes of my claim being filed. Only downfall was I had to fill out the form on my computer, my phone wouldn’t submit the form. I have not really done much with Twitter, but I am going to now. I feel like I should support something that is run that efficiently. After my positive experience with Twitter I want to become more integrated, so please follow me, tweet me, just say hi! I am a bit foreign to Twitter, but I am going to learn. On to the moral part of this story. I could sit idly by and tell myself that there are cruel people out there and that’s the world we live in. But, 1. You stole a photo of my 4 year old son. Say what you want out loud, to your friends, in the comment box, but do not take my photo to degrade my child. 2. I was told by someone on Instagram (not so nicely) to “chill” because this photo is not even a real person, it was photo shopped. Umm, no. That is definitely a person.

If you are going to laugh and share this meme, I think you should know exactly what it is you are sharing and laughing at. So, to everyone that “LOL’d”, shared, and posted that meme, let me start by introducing you to the child you find so funny. His name is Jameson. He is very real, and he was born with Pfeiffer syndrome. What is that? I’m glad you asked.

Pfeiffer syndrome is a craniofacial syndrome that includes craniosynostosis (premature fusion of the skull). The best way I can explain it is that there was a genetic mutation on the gene that tells your tissues and bones when to start and stop growing. Some grew too much (fused skull sutures), and some not enough (mid-face hypoplasia). As a result, Pfeiffer’s kids vary from one to the other. Because of the severity of the mid-face hypoplasia and cranial abnormalities some kids have more issues breathing, eating, seeing, and hearing than others. Some kids have just 2 cranial sutures fused, others have all of them fused. It all depends on the child. All of this determines what kind, and how many surgeries will be needed.

Jameson has had 2 cranial vaults, an anterior and a posterior, he’s had 4 sets of tubes placed in his ears, had his tonsils and adenoids removed, and soft palate reconstruction to help his sleep apnea. We know other kids, younger than Jameson that have had many more surgeries, and been through so much more. Some kids have had very serious surgeries to place shunts to drain fluid and relieve pressure in their heads (chiairi malformations). These kids undergo multiple major surgeries early in their lives and they are never really able to “just be kids”. These are the kids you are making fun of. Let me also tell you there are a whole bunch of different craniofacial syndromes other than Pfeiffer syndrome. And there are also kids born with craniosynostosis that don’t have any syndrome at all linked to it.

As I read comments on these posts I realized how much ignorance is out there about craniosynostosis and the various syndromes that can be associated with it. So, I wanted to clear a few things up. The result of these conditions are not due to something the parent did or did not do during their pregnancy. These are almost always random genetic mutations. Meaning, there isn’t anything that can increase or reduce your chances of having a child with Pfeiffer syndrome (unless you already have it of course). If you are interested in learning more you can easily find information online from reputable places like the National Institutes of Health, and Mayo Clinic.

When Jameson was born we found a wealth of knowledge about craniosynostosis and craniofacial syndromes from the Children’s Craniofacial Association.  If you enjoy reading, I highly recommend the book Wonder, by R.J. Palacio. So, to all of you out there that are laughing so hard at my son, know that this in fact could be your child. And if one day this does happen to one of you that are out there laughing and making fun, I hope and pray you change your heart and welcome that child with loving arms.

If you are reading this and you laughed but knew it was wrong I hope next time you choose to stand up for the child you see being made fun of. I know you are out there because I read countless comments from complete strangers standing up and saying how wrong it was.  Just because you don’t know the child personally doesn’t mean it doesn’t matter. It takes a village, and in this day and age of social media it is even more important to stand up and do the right thing.

To those of you out there that still have this meme posted know that a sleeping giant has awoken. You have poked the bear. You may not yet be familiar with the cranio-community, but you will. There is an army of cranio-warriors fighting for Jameson and all the other kids out there.

I hope my tone is not negative, if it seems that way I apologize, but I am a protective mother. I promise you that as hurt as I am that someone created this meme I am not naive enough to believe there aren’t people out there who will mock and bully my child. But, I will always do what I can to encourage people to open their minds, hearts, and lives to Jameson and kiddos like him. We always Choose Kind, and we want you to as well.

What can you do to help? If you see this face somewhere it doesn’t belong, or if you see that meme, screenshot it and send it to me. Please do not share the meme. The screenshot also provides me with proof. You can also report it, as many times as you want. Unfortunately, that’s really about it for now. Once something is out there it’s there. Nonetheless, I refuse not to fight. It is absurd to me that it will ever be ok to target children to degrade and humiliate them.

For more on Jameson, visit his blog at www.jamesonsjourney.com.

Lets fight against the norm. Think about your words, think about being on the other side of the story, question things, question yourself and love without limits. 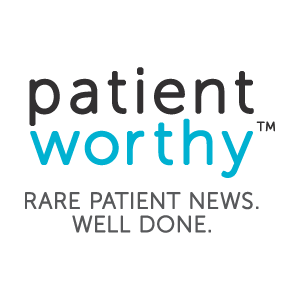 The contents of this website, such as text, graphics, images, and other material contained on the website
(“Content”) are for informational purposes only and do not constitute medical advice; the Content is not intended
to be a substitute for professional medical advice, diagnosis, or treatment. Always seek the advice of a physician
or other qualified health provider with any questions you may have regarding a medical condition. Never disregard
professional medical advice or delay in seeking it because of something you have read on this website.

In the event of a medical emergency, call a doctor or 911 immediately. This website does not recommend or endorse
any specific tests, physicians, products, procedures, opinions, or other information that may be mentioned on the
Site. Reliance on any information provided by this website is solely at your own risk.

The Site and the Content are provided on an “as is” basis.

Links to educational content not created by Born a Hero are taken at your own risk. Born a Hero is not responsible
for the claims of external websites and education companies.